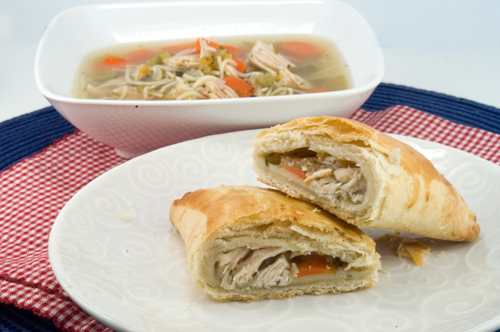 We are having a blizzard here this weekend, and I thought I would whip up a batch of chicken soup for the hubby who’s out plowing snow. Then I remembered I wanted to make some Chicken Hand Pies, similar to ones I pinned on Pinterest recently. So I made some chicken soup minus the noodles and then once the mixture was cooked, I took some out to thicken for my Chicken Hand Pies. Then I proceeded to add the noodles to the soup.

A chicken soup rich in chicken and vegetable flavor, perfect soup for your soul.

The soup turned out beautifully. Super tasty, and the chicken was ridiculously tender. I started with Bell & Evans chicken. If at all possible, I don’t use any other brand. It’s more money, but well worth the extra cost. I hate rubbery, tough, tasteless chicken. And Bell and Evans is totally the opposite. This soup is easier than easy to make. I started with some low sodium chicken broth (I prefer Swanson, but any will do). I rinsed the boneless, skinless chicken breasts, and threw them in to the soup pot. Then I added sliced carrots, sliced celery, some chopped shallots, and dried parsley, dried celery leaves, celery seed, salt and pepper. Oh, and I added some of my favorite dried vegetables. I let it cook on medium low for about an hour, or until chicken is cooked and vegetables are tender.

The I took some chicken soup out and set aside for the Chicken Hand Pies, and added some very fine soup noodles to the soup, and cooked a little further til tender. Viola, soup done! This pie dough is not only super easy, it is tasty and flaky. Perfect for turnovers, pies or squares.

Then I took the chicken mixture that I set aside, and thickened with a little cornstarch, and cooled and refrigerated. Then, I made my favorite pastry from Cooks Illustrated, and put in the refrigerator.

I rolled out the dough, and took a round 6-1/2″ bowl to use for the circles for the pies (you could make square, or any shape). I made four, but had some pastry left over so you can probably get 6 out of a double crust pastry recipe. In the center of the circle, I dripped about a tablespoon of thickened filling. I a little apprehensive about the thickness of the filling, so I added a sprinkle of quick cooking tapioca to thicken pies a little more, just in case. I took a little egg wash and went around the edge to be sealed, folded over and crimped with a fork. I pokes a couple holes in the tops and brushed with the egg wash. Place on a cookie sheet lines with a Silpat or parchment, and cooked at 425 degrees F for about 15-20 minutes, or until golden brown.

Even though you want to, let them cool to room temperature before cutting. These little pies are extremely delicious. What a wonderful idea for a “take and go” recipe for today’s busy families!

The little hand pies are an excellent way of getting a wholesome meal in to those “on the go” people in your family!

If you are just making the hand pies and not the soup, make a much smaller batch of soup for the filling (maybe one half boneless chicken breast, a carrot or two, same for celery and one shallot; maybe 32 oz. or 48 oz. chicken broth). You really don’t need very much for each pie. 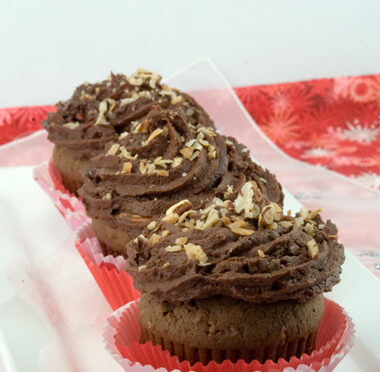