I saw the idea for this soup on Pioneer Woman blog and decided to make it today. The soup is basically a chicken soup with canned tomatoes (I use Vantia), and also has heavy cream added at the end. Well, between making the Twice Baked Potatoes, this soup, and my daughter coming over to clean and put her boat away for winter, I forgot all about the cream at the end. I gave her some soup, and after she left remembered the cream. I tried a little in a small bowl and thought it was very good, even without the cream. I the added the cream in a small amount and it tasted great as a creamed soup as well.  My husband loved it without the cream. The moral of the story is…this soup is delicious with or without the addition of the cream.

My daughter keeps talking about this soup, so I may have to make it for Thanksgiving or Christmas! Place chicken in a large stockpot, and cover with chicken stock. Add the whole carrot, celery and half onion to stock. Cover, cook approx 1 hour or until chicken is done, and is easy to take off the bone. Cool chicken. Strain broth and set aside. Take chicken off bones and shred.

While chicken is cooking, cook pasta in a separate saucepan, according to package directions. Drain and cool on a sheet pan. Store in a covered container after cooling.

Cut whole canned tomatoes in to dices and set aside.

While chicken is cooling, in the stockpot that you cooked the chicken in, add a few tablespoons of oil, the sliced carrots, celery, onion and red pepper. Cook until slightly soft (about 5-7 minutes).  Add broth back to the stockpot. Add shredded chicken and add in to broth. Add tomatoes, zucchini and herbs to broth.

Cook soup for another 1/2 hour or longer on low, or until the veggies are fully cooked.

If adding the cream option, add a little hot soup mixture to cold cream, warming up cream gradually before adding to soup. The cream may curdle if added to soup ice cold. 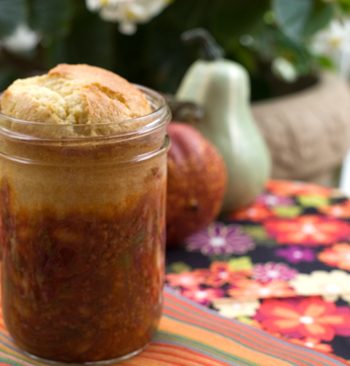 Chili and Cornbread in a Jar 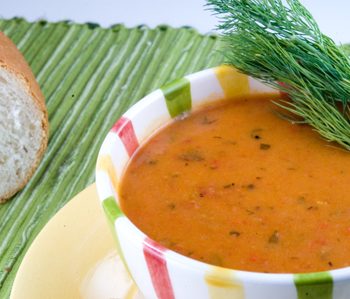